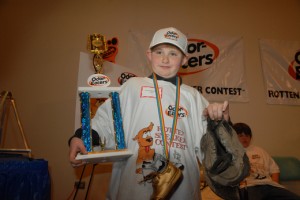 What’s that smell? – The smelliest sneakers in the world

The impressive winning sneakers were a low cut Converse that once upon a time had been snow-white in color. However, Sterling’s regular days out in search of frogs and bugs had left them not only torn, but also, so foul smelling, that the judges described them as the‘the worst of the worst’! 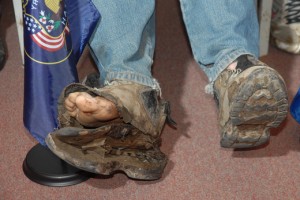 The nine-year old resident of  Benjamin, Utah was rewarded handsomely for his efforts, with a check for $2,500, a Golden Sneaker award, a trophy, a basket of Odor Eaters products and, an all expenses paid trip to New York City to watch Mary Poppins on Broadway. More importantly, his rotten sneakers will forever been shrined in Odor Eater’s Hall of Fumes.

Now in its 36th year, the Rotten Sneakers Contest was conceived in 1975 by a sporting goods store owner in Montpelier, Vermont to promote a new line of shoes. When the city’s recreation director heard about, he decided to make it a citywide event. In 1988, the makers of Odor Eaters decided to take it over and make it a national event. 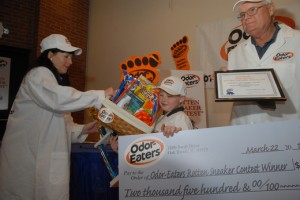 The contest is judged by expert smellers, which include ‘Master Sniffer’ George Aldrich, a chemical specialist for NASA Space missions, Rachel Herz, a professor at Brown University and Montpelier City Manager, Bill Fraser. How do they decide? Sneakers that are really tattered and torn, but most important of all, ones that smell terrible – and they mean foul enough so that you can smell them from a distance.

Think you can do this? Then what are you waiting for? Start working on those sneakers and see if you can make your parents proud, by owning the most disgusting, smelliest sneaker in America!