The Happiest Man on the Planet

Johnny will be there at 3:45 a.m. everyday without fail, with his backpack and radio, wearing a straw hat. As day light breaks and commuters on two and four wheelers start approaching Hamilton, Bermuda for their days work, Johnny swings into action. 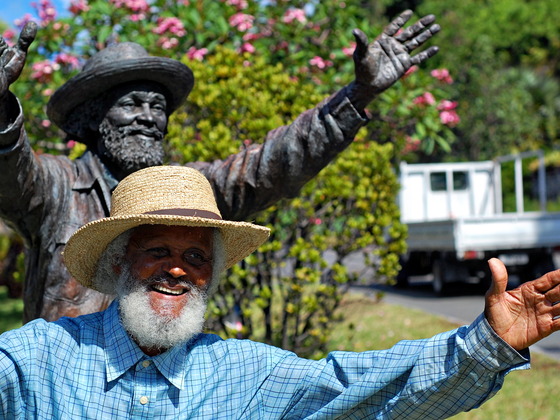 Johnny Barnes, an 85-year-old resident of Bermuda, has dedicated his life to bringing a smile to people’s faces. Bermuda has some of the densest road traffic in the world, leading to some very frustrated commuters. 26 years ago, Johnny was walking to work when he got stuck at a busy intersection. As people drove past, he started to wave to them and say good morning. He enjoyed it so much, he came back the next day and waved to people, blew kisses, and shouted “I love you!”

At first, some people thought he was crazy, but pretty soon everyone started to appreciate a little bit of love and happiness to brighten up their dreary commute. Every morning since then, rain or shine, Johnny wakes up at 3am and heads to that intersection, spending hours waving and greeting all those who pass, sometimes stopping to pray with tourists for a safe journey home.

Johnny has become the most beloved man in Bermuda, with many people referring to him as “Mr. Happy Man,” there has even been a statue of him erected at his famous intersection. Johnny has a lot to share about what it takes to be optimistic and happy in life.

Watch the inspiring documentary about Johnny below. Then watch the TED video on the right where you’ll learn nothing less than the secret of happiness.