Our very own Mark Brown cycled to his home town in the UK from Barcelona this summer. Here’s how the local newspaper in England reported his epic journey.

Ashington expatriate Mark Brown defied the elements and aching muscles on route to complete a mammoth cycle ride of more than 1,200 miles from Barcelona to his old home town.

Mark, originally from Ashington but now a teacher in the Spanish city, completed the bike ride in aid of the Northumbrian town’s football club. 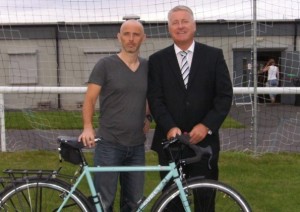 Mark arrived at Woodhorn Lane, the home of Ashington Football Club, 14 days after setting off from Spanish and European champions Barcelona’s Nou Camp stadium. He said: “Within a couple of days of leaving the Nou Camp, I was over the border and following the Mediterranean coast of France. “That was picturesque, and the weather was sunny and beautiful.

“Northern France was different because you hit Normandy and the British weather coming in off the Atlantic. “It was raining, there was drizzle for three days, and it was unpleasant. Then there was a seven-hour ferry overnight to Portsmouth, where we docked at 6.30am in the morning.”

Mark’s journey through England took him from Portsmouth via Oxford, Leicester, Lincolnshire and York, then up to Wansbeck. On his arrival at Woodhorn Lane, Mark said: “I don’t know if enjoyable is the word – let’s say it was an experience.

“It was enjoyable at times, but at other times it was difficult, and, to be honest, if I hadn’t been sponsored, there were a couple of occasions where I may have called a halt. “I hardly saw anything of the towns or cities. I knew I had to complete the ride as I only had a certain amount of holiday, and I also wanted to see my family.

“I’m really chuffed. My plan was to do the cycle run anyway without being sponsored, then it was arranged to do the marathon for my father’s football club. “We set a target of raising £1,000 and that has been achieved, which is fantastic.”

Club chairman Ian Lavery, also MP for Wansbeck, said: “Regardless of the money, which is very welcome, Mark has completed a tremendous achievement in cycling over 1,000 miles in 14 days.

“He has done it in aid of the club, so we say many congratulations and a sincere thanks to Mark and those who have supported him.”