How to survive the summer holidays: making (and ditching) friends 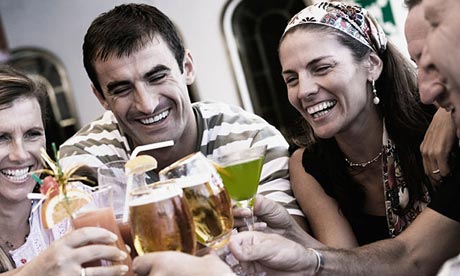 If you’re the sort of person who goes on holiday to meet people, it might be time to take a good hard look at yourself. At some point during your nascent relationship, your new holiday friends will ask themselves a serious set of questions. Questions that might include: “How did these people figure out my name?”, “Do I really have to eat with them again?” and “Oh God, what if they want romance?”

By and large, holiday friendships are the worst. Oh, sure, they start well enough – usually in a tipsy, sun-drenched rush of where-are-you-froms and how-was-your-flights – but that never lasts. By day two, they’ve bonded with you. By day three, you’re trying to overlook their obvious psychological shortcomings. By day four, you’re deliberately avoiding their attempts to get your attention at dinner. By day six, you’re so overwhelmingly sick of hearing about their sodding workmates that you’ve started cancelling all activities that they’ve even vaguely expressed an interest in. Day seven – when they say “Let’s stay in touch” and you scream a made-up phone number back at them and run for the airport – cannot come quickly enough.

But, fine, maybe I’m in the only person in the world who hates holiday friendships enough to spend entire trips twitching and alone in my room. Maybe, for whatever reason, you really are interested in meeting people. If that’s the case, it’s incredibly important that you choose your prospective friends carefully.

How old are they? Do their interests match yours? What books have they brought? Are they always drunk? Are they a couple scouting around for friends because they obviously can’t bear to spend an entire week in each other’s company? Do they look like the sort of people who’ll turn up at your house at 3am because they mistook “Let’s stay in touch” as an offer to actually stay in touch and not just an easy conversational get-out? Trust me, this will be the difference between a terrible holiday and a tolerable one.

Remember, you’re going to be stuck in the same place as these people for several days. Pick badly and it’ll be almost impossible to extract yourself from the friendship before the break ends. You won’t be able to stop running into them – whether they’re picking at their bellybuttons by the pool or pushing a boiled egg around a plate at breakfast because they don’t know the Italian word for “egg cup” – and it’ll be excruciating.

Plus, thanks to Facebook, it’ll never end. At some point, either during the holiday or afterwards, these people will track you down online and befriend you. And then that’s it. You’re doomed to decades of birthday notifications and photos of their children and constant reminders that they still don’t know the difference between “your” and “you’re”. You’ll spend the rest of your life in a state of quiet panic in case one of them suddenly mentions that they’re visiting town. At least in the past you knew that bad holiday friendships had an ending. Now, for anyone on Facebook, they’re a life sentence.

But maybe I’m being too negative. Sometimes, if the wind is blowing in the right direction and you both understand the transient nature of the relationship, meaningful connections are still possible. The boy I met in Portugal when I was two who could only say the word “toast”. The bored teenagers who I played rock, paper scissors with for 90 minutes while their mum faffed around in a department store. The woman vomiting on a cross-Channel ferry. The German guy who very carefully taught me all the swearwords he knew. I will always remember these people. I don’t want to be friends with them, though. Good God, no.