Hey. I’m Calum, I work in Sants. I’m from Edinburgh, the capital of Scotland. Its a lovely city, in a lovely country. The people are very friendly, but the weather is very bad. The football is very bad too! There are two bad teams in Edinburgh, my team is the worst.

This is a story about football, both good and bad.

Here in Barcelona, everyone is always talking about Barça. It’s an obsession. I’m going to tell you about my team, and also some Barça history you won’t know.

When I was a wee (= ‘small’ in Scottish dialect) boy, my dad took me to see his team – Hibernian FC. Or ‘Hibs’. The Hibees. The Cabbage. The Cabs. The Best Team in The World!

They’re a wee, modest team (for example, like Betis) who also play in green and white. 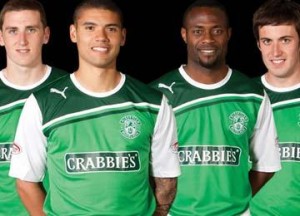 They don’t have much money. They don’t win a lot of games, and hardly ever win any trophies. But I love them. They’re my team. They play in the Premier League in Scotland. At the moment they are second-last, but playing well in the cup.

Hibs might be a small team, but they have always been innovators. In 1956 they were the first British team ever to play in Europe, and they got to the semi-finals of the competition. In 1957, Manchester United started playing in Europe too. In 1967 Glasgow Celtic, from Scotland, became the first ever British team to win the European Cup, 2-1 against Internazionale Milano, today’s Inter Milan.

A few years before that, Hibs played in the Maracana Stadium in Brazil. Invited there to play in a World Club Championship because of their reputation for great football. The best ever Hibs team is from the early 1950s. It was legendary. They were called ‘The Famous Five’, because of the five exceptional attacking players they had. If you look on Internet, you’ll find articles about how the Hibs style of play influenced the Brazilian national team! Influenced Pele! I’m not sure about that. It’s a lovely idea. Maybe it’s true, maybe it’s not…

Hibs were also the first British team to have a sponsor’s name on their shirts. And the first Scottish team to have undersoil heating. It was possible to heat the pitch, and the snow and ice would melt and disappear. Very useful in Scotland, in winter. Many home-grown Hibs players have later played for the Scotland national team as well as Celtic, Rangers and various English clubs. One ex-Barça player even played for Hibs! Another day I’ll tell you about him.

He became famous when he was still a teenager. He was a good person in public, attractive and friendly. Later, it became normal to see his photos in newspapers – in a nightclub somewhere, with glamorous models. He started to have lots of problems. 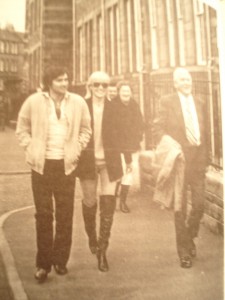 When he signed to play for Hibs, he was 33 years old, fat, and had a drinking problem. It would be a bit like Betis signing David Beckham or Cristiano Ronaldo when they are old and drunk. But at the time it was an innovative dream to try and save Hibs from relegation to the Second Division.

Hibs lost away from home in George Best’s first game, but he scored a goal, and almost scored again. In his second game, at home in Edinburgh, Best helped Hibs to an easy win.

George Best played for Hibs for almost a year. He scored lots of goals, gave a lot of great passes, and made people smile everywhere he went. For once, there was excitement and dazzle in Scottish football.

On YouTube you can see George Best scoring a great goal for Hibs against Celtic. His shot puts the goalkeeper in the net! You can watch the clip below. 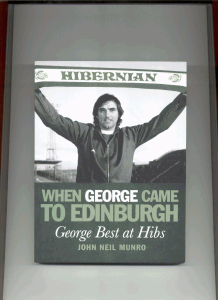 George Best when he signed for Hibs.

At the end of that season Hibs got relegated from the First Division. George Best was still a fantastic player, but the rest of the team were terrible! I saw George Best playing for Hibs a few times, and he was amazing. Unforgettable.

But I’m sorry, I forgot about Barça.

Next time I’ll tell you about when Hibernian played Barcelona, ok?